No relation to this site, I should point out! SFX is a British Science Fiction magazine; relatively young compared to the likes of Starburst but has a big publishing house behind it. I hadn't even thought about putting a site together when SFX published an article which covered Star Fleet in Issue 32, December 1997 as part of their couch potato series. As you'll see from the scan of the page reproduced below (click on it to get a readable sized version) the article's quite tongue in cheek, but it did set me thinking about the show and it included some very ropey screen captures from the custom-made compilation video the gang had been watching. I had discussed the show on the Net (on a Babylon 5 newsgroup, for the curious) before, but this was the first time I'd seen anything in print. It was two and a half years before the Manga Max article appeared - and by then the Adamantium version of SFXB was up and running and the URL found its way into the article! 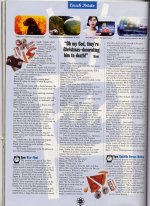 With thanks to Shane from Big Dai X for spotting this one, Star Fleet featured in SFX's top 50 sci fi shows of all time in the 50th issue of SFX, April 1999, coming in at number 45. Somebody in that publication must definitely be carrying a torch for the show, although their description isn't quite spot on: 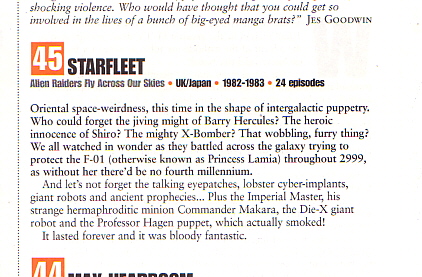 The most recent Star Fleet related item in SFX came about as the result of someone writing one - and this time round, SFXB itself got a plug! I received an email which mentioned that SFXB had somehow gotten into Issue 86, January 2002. Intrigued, I hunted down a copy and it turned out that one Richard Uttley had sent in a letter challenging the "SFXperts" over whether a series someone had asked about was Terrahawks or Star Fleet. It's not an uncommon confusion, and it got me a free plug! Letter reproduced below.