Terrahawks, stay on this channel. This is an emergency!

TERRAHAWKS NEWS: See the Terrahawks forum for reviews of the new DVDs and information on the content of the latest releases.

I recently had the opportunity to re-watch some Terrahawks episodes. They were... quite disturbing, actually! I didn't remember the show being anywhere near as off the wall as it turned out to be. It was very, very 80s - right down to Kate "Tina Turner" Kestrel's singing! Terrahawks came out very shortly after Star Fleet aired (leading to a certain confusion between the two), and seems to have disappeared from TV schedules in similar fashion. Why that should be the case, given Gerry Anderson's involvement with the show, I just don't know...

The bloke on the left is Tiger Ninestein, one of nine clones, founder and leader of the Terrahawks. The Terrahawks were set up to battle the alien forces led by Zelda, Queen of the Planet Guk (no, seriously!), who eliminated the Earth base on Mars and claimed the planet as their own. Ninestein's catchphrase - "Flaming Thunderbolts"!

The evil crone/hag/android on the right is Zelda. Aided by her "son" Yung-Star and "daughter" Cy-Star she throws an assortment of cryogenically stored baddies at Earth and the Terrahawks, ranging from teddy bears that can bend metal to cloaked figures that can bend time! Star Fleet connection - see the Voice Actors section!

The characters that people often remember are the Zeroids, led by Sergeant Major Zero, and the less outgoing Cubes. At the end of each episode they'd have a wireframe noughts and crosses match - which the Cubes often won by cheating! One episode I remember had the Cubes forming a massive gun out of themselves.

Sergeant Major Zero with another Zeroid on the left, and one of Zelda's Cubes on the right.

As you'd expect from a show associated with Anderson, the good guys had all sorts of fun and games getting their vehicles in the air. Battlehawk, pictured on the left, starts off horizontal and is vertical by the time it comes out through the roof of the Terrahawks mansion. The Battlehawk's a nice bit of kit - it has the detachable Terrahawk command ship docked on top of it and can also air drop the Zeroid driven BattleTank.

Perhaps the most memorable launch, and possibly the most implausible, was Hawkwing's. Piloted by Kate Kestrel and Hawkeye, this flying wing affair launched out of a giant whirlpool in a lake. The least impressive launch was Treehawk's - it launched out of, well, a tree basically. Mmm. Other KITT (ahem!) included Hudson, a colour changing Rolls Royce (eat your heart out Lady Penelope!) and Spacehawk, the rather impressive first line of defence against space borne incursions.

Meanwhile, Zelda was more practical - she had this nicely organised base on Mars and stuck to using Zeafs (fighter craft) or other means of getting past Spacehawk to land on Earth. It was then generally down to her Cubes or the thawed-out villain of the day to wreak havoc until getting thwarted.

Oh, and lest we forget - the Terrahawks employed a cunning trucker-style system of shorthand codes: 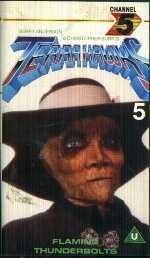 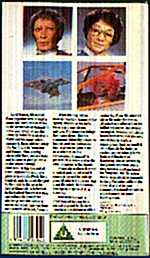 As I mentioned at the top of this page, I recently saw some episodes - by virtue of stumbling across this tape in a second hand shop.

A more reliable source of tapes, and indeed the merchandise associated with the show (a lot of which I owned back when the show was on TV) is the auction site eBay - use the search box below to see if anything's available. Tape 6 is super-rare, apparently. In light of the modern release of the DVDs these tapes may go out of demand, I suppose, but they're still rare...

Finally, here's the theme tune for you plus links to more exhaustive sites...

Feel free to discuss the show on the forum - it has its own section!