I'm asking for your support to possibly get a Lego version of X-Bomber on the shelves! You can add your support on the Lego Ideas site here. Here's a demonstration video of the first version!

Your support is, as ever, appreciated - and it's going to take a lot of it! Also, if you happen to be an AFOL or your child has a lot of Lego, you can download this file for use with the Lego Digital Designer software. Please send in pictures of your version! Last but not least, here's a Flickr album of the build.

The X-Bomber, along with its Dai-X fighters, makes up the X-Project which Professor Hagen was working on prior to his departure to find out more about Lamia's origins. Dr Benn took it over, bringing it close to completion by 2999 when the Alliance first invade the Solar System. When it first launches from Moon Base to combat a task force of Imperial carriers and fighters it does so on a wing and a prayer with an inexperienced crew.

Subsequent encounters demonstrate the X-Bomber's ability to take damage and dish it out. Although it is damaged by the Alliance on several occasions throughout the series, even a direct collision with Orion's carrier fails to destroy it outright. There are often references to the X-Bomber having an energy shield, but it is only seen visibly in episode 4. It therefore seems likely that the X-Bomber's hull is heavily armoured in addition to this energy shield. (A Star Trek analogy would be the Defiant's ablative armour).

Of course, the X-Bomber wouldn't be an effective fighting machine if all it could do was soak up hits all day long. The X-Bomber's armaments are designed to cope with a variety of threats.

For point defence against enemy fighters there are manually controlled twin-barrel rapid fire laser turrets, generally manned by Shiro and Hercules. These are based on the flight deck and seem to cover an arc of roughly 45 degrees in all directions, which means that there are blind spots directly above and below X-Bomber's neck. Imperial ground troops take advantage of this lack of coverage in one episode by getting into a positon directly underneath X-Bomber which Lamia and Kirara cannot attack from the flight deck. The general concept is quite similar to the Millennium Falcon's turrets in Star Wars.

In order to deal with enemy ships ahead of X-Bomber and outside of the firing arcs of the manual turrets, there are twin pulse laser turrets mounted at the top of X-Bomber's neck. These lasers seem to have a shorter range than the main neck lasers as they are not used as often, but are still capable of destroying Imperial carriers that come in too close. They are also able to swivel on their mountings with Hercules controlling their targeting, suggesting that they have a broader firing arc than the main neck lasers.

When dealing with targets requiring heavier firepower to be deployed or at greater range, the X-Bomber's neck hinges and swings upwards to allow the primary laser cannons to move into position. These can fire in a beam mode or as rapid fire pulses and are capable of doing damage to Makara's cruiser as well as destroying Imperial carriers or groups of fighters. The cannons require a significant amount of energy to fire and have a narrow arc of fire, so the X-Bomber must be facing its target to use the cannons.

The X-Bomber also has rear firing lasers which seem to be similar in power (from appearance) to the primary laser cannons. These were only used once when Orion's carrier was attacking X-Bomber from behind as part of his suicide run.

For a rapid assault when the primary laser cannons aren't available, X-Bomber fires laser torpedoes from its wing tips which merge into one concentrated attack just ahead of the ship. They are capable of penetrating the armour on Makara's cruiser.

The weapon of last resort, only used twice in the series, is the X-Impulse. Given the intensity of the blast involved it's likely this was quite a risk for X-Bomber to fire and it used up so much energy that the ship was relatively defenceless after it had fired. X-Impulse was disabled by Orion's suicide attack on X-Bomber which may explain why it wasn't used against the Imperial Fortress. This sort of mega-blast is quite common in anime shows, and the main ship in the Babylon 5 follow-up Crusade, the Excalibur, had a similar weapon which also caused a massive power drain when used! 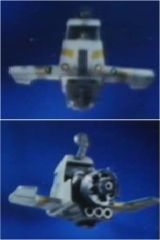 Due to its size, X-Bomber is able to carry several ancillary craft which we see in the series. The first is this one-person inter-atmospheric shuttlecraft which Lamia "borrows" in order to respond to the Skull's invitation in the fifth episode. It seems to be a bit of a dodgy design, though, as its engine gives out before Lamia can reach the Skull. It ends up being towed back to X-Bomber by MainBody and LegTrax.

In a later episode Lamia "borrows" another craft, the Space Chopper, this time with Shiro driving, again to get to the Skull. The Space Chopper sees a lot of action in the episode as half of it, the sealed passenger compartment, gets blown off leaving a scorched Shiro on the "scooter" segment to blast away using the Chopper's cannons as he tries to rescue Lamia! A third, two-seater shuttlecraft takes Lamia and Kirara across to the Skull at the end of the series.

Strangely, X-Bomber doesn't really take part in the series finale. The only reason for this that I can think of, as mentioned elsewhere on this page, is that it's been heavily damaged by Orion's suicide attack and subsequent assault from Makara's cruiser. Also, with the lads manning Dai-X only PPA and Professor Hagen were left on X-Bomber. Although PPA fancied himself a tactical genius, the odds are that X-Bomber would have been a liability in the final battle.