It's the start of December 2017, and in a rare update here, I'm asking for your support to possibly get a Lego version of Dai-X on the shelves! You can add your support on the Lego Ideas site here. You may of course have come from there! Your support is, as ever, appreciated - and it's going to take a lot of it!

Not even remotely Welsh, Dai-X is a pure bred anime style combining robot mecha. Its Japanese creator, Go Nagai, was responsible for the design of some of the earliest anime robots, with Mazinger Z in particular introducing the concept of a robot as a piloted vehicle rather than being autonomous or remote controlled. It's also interesting to note that LegTrax, Lee's Dai-X fighter, has two modes - ground assault and fighter. So it's a very complex mecha for its time.

The three Dai-X fighters which merge to form Dai-X in robot mode are normally docked with X-Bomber. The two largest components, MainBody and LegTrax, are stored in the large side pods while BrainCom is docked under X-Bomber's neck. The lads get to their ships using Thunderbirds-style moving command chairs.

BrainCom, known as Brainder in the Japanese version of the show and in the British comic material which used the Japanese mecha names, is piloted by Shiro Hagen. It forms Dai-X's head. As an independent fighter craft BrainCom seems to be the fastest and most manoeuvrable of the three fighters.

MainBody also known as Jumbody, is piloted by Barry Hercules. This unit forms Dai-X's chest and arms. MainBody doesn't come across as being the most nimble of the fighters, but its main weapon seems to be quite powerful and it's probably the most heavily armoured of the trio. 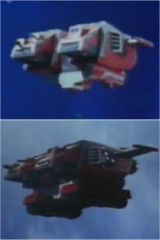 LegTrax, a.k.a. Legstar, is controlled by John Lee and forms Dai-X's hips, legs and feet. As mentioned above, this fighter is unusual in that it has caterpillar tracks which can be used to turn it into a ground assault vehicle. As a result its performance as a fighter is probably somewhere between that of BrainCom and MainBody. It proves itself very capable in space when Lee rescues Shiro and Lamia from pursuing Imperial Fighters in episode 14.

The actual mid-air/space linkage of the Dai-X fighters to form the Dai-X robot is one of the best sequences in Star Fleet because it looks as if it works. It happens a few times in the series and is never stock footage - some element of the environmental conditions is always reflected in the action.

LegTrax unfolds, doubling its length to form the legs of Dai-X and brings the feet through ninety degrees. There are then a series of mechanical interlinks - one between LegTrax and MainBody, and then quite a complex grapple and "screw down" sequence between MainBody and BrainCom. After much debate, the forum's decided that it's just about possible for Dai-X's fists to be stored in its forearms - you never actually see how they appear in the series! 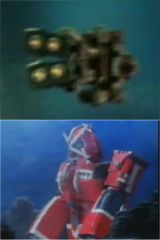 Anyway, once the Dai-X Junction manoeuvre is complete the Dai-X robot is on-line in its flight mode. Powered by four engines, two at the base of each foot, Dai-X is capable of combat manoeuvres in space and in atmosphere and can achieve escape velocity. However, it is probably not capable of reaching hyperspeed and would need to be ferried by X-Bomber over long distances.

The Dai-X robot is at least as tough as X-Bomber - only the Imperial Fortress' weapons were able to cause it serious damage in the series, although the Death Ball was also quite effective as it was engineered to take on Dai-X. As with X-Bomber, Dai-X can erect an energy barrier to protect itself from attack.

Although Dai-X's armour allows it to destroy opponents by throwing punches and, ah, stamping out the opposition, it does have a variety of ranged weapons at its disposal.

The Super Cannon is mounted on Dai-X's right wrist and fires pulse blasts with greater firepower than the fighters' individual weapons. On the left wrist are a pair of powerful torpedoes. Another laser cannon is housed in Dai-X's right foot. These weapons are generally used on "soft" targets like enemy ships and gun emplacements.

When the going gets tougher, the combined BrainCom can bring several firepower options into play. The first of these is a continuous yellow laser beam fired from the X-Emitter on BrainCom. This was used to destroy the Death Planetoid. Dai-X's eyes can also be used to fire two red laser beams. The final option is the X-Tracer attack. This resembles a miniature X-Impulse attack as pulses of X shaped laser fire are sent towards the target from the X-Emitter. (X-Emitter is a phrase made up by SFXB, incidentally!)

If all else fails, Dai-X can open fire with the Breast Cannon. This is normally concealed under armour plates on Dai-X's chest and was first used in the last episode against the Imperial Fortress. Its firepower was enough to make the Imperial Master order the use of the Delta Laser against Dai-X. One of the Gundam Wing mechas uses a similar attack - now you know which came first!

One final small point about MainBody and LegTrax - in episode 5 they attach grapples to Lamia's shuttlecraft and tow it back to X-Bomber. Not massively significant, granted, but just another one of those nice little design details in the series.