I must admit, I was never into what you'd call "pure" Dungeons and Dragons, but dabbled with Steve Jackson's Fighting Fantasy style of role playing at the sort of age Dungeons and Dragons hit the BBC. It wasn't until much later I played the real thing. Anyway, this series was a great (if considerably more simplistic) introduction to the concept of role playing as the characters really were picking things up as they went along. Although they never properly made it home, the final episode when they did make it was written and you can, I believe, find it on the web even though it was never produced.

Hank was the Ranger character, and the nominal leader of the group. His energy bow has always stuck in my head because it's extremely cool (!) and the only decent offensive / defensive weapon the kids have at their disposal. He's not the brightest, but he has guts...

On the right, Dungeon Master, the kids' guide and mentor. He gifts them all their special powers but is decidedly indirect when helping them get home. Think Yoda with better skin.

On the left, Venger. He's Dungeon Master's nemesis - the Darth Vader of the series. Enjoys casting energy bolts and sneaking around in disguise in order to nick the kids' powers. Dislikes multi-headed dragons... 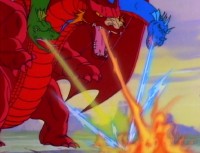 Speaking of which, here's an example of one - named Tiamat - that frequently appears to annoy both Venger and the kids - although the latter often play him off against Venger quite successfully. His heads spit various forms of attack, including fire and ice.

Hank is, of course, not alone on his quest to find a way back home. Several other kids are thrown into the Realm with him, including a cowardly cavalier with a magic shield, a wizard with a defective magic hat, a strong female black character (refreshingly at that time), and a brother and sister barbarian and thief. And of course there's the obligatory RAC - a baby unicorn. As you'd expect in a RPG, all have different strengths and weaknesses, but the team works. Sort of....!

In case you hadn't noticed, the full series is now out in the UK on DVD complete with extras. It's a decent transfer, and while the puzzles and the like seem simplistic now it's still a fun romp and holds its own, largely thanks to the strengths of the characters. Finally, here's the intro video for you plus a link to a more exhaustive site. For, ah, "technical reasons" (!) in order to watch the clip you'll need to right click on the link, select "save target as" and rename the file so that it ends in .wmv rather than .sfxb. The video format is Windows Media Video which modern versions of Windows Mediaplayer will play.