Thunderbirds - five of the finest cadets in the world!

This is another of those 80s shows that I now know was originally a Japanese anime. I was always a fan of the original Thunderbirds - me, and most of Japan, actually! So what you have here is effectively a tribute show - Thunderbirds "The Next Generation" so to speak, actually known as "Scientific Rescue Team Technovoyager" in its country of origin. As it happens, the TB initials appear on the ships due to a lingustic quirk only - TV (for Technovoyager) became TB! No strings in this one, but you do get rocket sleds and the obligatory anime link-machines-together sequences! Plus, and as I remember very well, the introduction used pseudo-computer graphics which looked very very good for the time - unfortunately the in-cartoon animation wasn't quite that good!

So, from left to right, the cadets - Dylan Beyda, Jesse Rigel, Johnathan James Junior (!), Gran Harrison and Kallan James. The funny thing is, although the English introduction reckons they're all "cadets" most of them are actually full officers... Anyway, in true anime style, from left to right - the brash young hero type, the camp romantic, the cool black guy, the big tough guy and the foxy babe. There is, predictably, also a RAC in the series but I couldn't be bothered to scan the annoying brat in. Trust me, you're better off!

One difference between Thunderbirds 2086 and its inspiration is that this International Rescue is government recognised and in the open. It's headed by this bloke, Dr Warren Simpson. Like Pa Tracey, he's the founder and designer of the equipment and is ex NASA etc. The comparisons are easy to draw, really. The team's even based on an artificial hi-tech island colony, the Arcology. Now, what you really want to know is - what did the Japanese do to the Thunderbird machines given that this is anime and set in the future? Well, let's have a look, shall we...?

There are 17 Thunderbirds (that I know of, based on the UK annual) in Thunderbirds 2086. Some of them are brand new, others are reinventions of the original craft. The latter are represented below...

This is Thunderbird 1 - "Advanced Space Shuttle". Basically pretty similar to the original TB1, but it can go into space...

Thunderbird 2 - "Hypersonic Transport". Again, very similar to TB2 in the original series but again capable of space flight. The other novel thing about this big blue bird is that Thunderbird 1 can dock onto its back and it can then pick up Thunderbird 3 (coming to that one) from the ground. Thus is formed a massive conglomerated ship which can blast off into space with a serious amount of kit. You'll see that in all its glory in the clip of the intro sequence below.

This is Thunderbird 3 - "Reconnaissance Ground Vehicle". This is where the Japanese started to change things. In the original series, you may remember that TB3 was the orange space rocket. Of course, in this series, TB1 and TB2 have spaceflight capabilities so another dedicated rocket isn't really needed. So instead we have a big ground vehicle, something similar to TB1's command centre or something that'd get carried around in the pods in the originals series. Improvements, eh?! 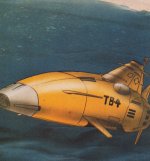 This is Thunderbird 4 - "Sumbmarine" (!). Same TB number, same TB features, as the original one - but doesn't it look SO much sleeker and nastier?! 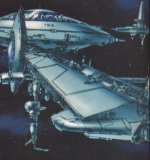 This is Thunderbird 16 - "The Mole". This is, quite obviously, the updated version of the good ol' burrowing machine from the original series which, like Thunderbird 4, has been given the "clean and shiny" anime treatment. You know where you are with the Mole...!

Finally, this is an example of Thunderbird 9 - "One-Man Space Walker". This is one I've thrown in because it's a subtle little mecha inclusion in the Thunderbirds universe and it reminds me a bit of the pods out of 2001. It's probably also one of those little things that sparked off my interest in robot-y things in general, too...!

I have seen this quite recently because there's a tape that does the rounds on Ebay, which features 2 episodes of the series plus a Captain Scarlet adventure. As you often find with these things, the animation 20 years on doesn't quite match up with how you remember it, but nevertheless it's a great tribute to the original series. The images on this page are sourced from the rather excellent 1983 Annual - again, my copy recently sourced from Ebay and something I owned when I was younger because I actually remember the comic strips and pictures in it better than the cartoon!

Finally, here's a video of the intro for you plus a link to more sites. For, ah, "technical reasons" (!) in order to watch the clip you'll need to right click on the link, select "save target as" and rename the file so that it ends in .wmv rather than .sfxb. The video format is Windows Media Video which modern versions of Windows Mediaplayer will play.