I love it when a plan comes together!

This series probably doesn't need any commentary, but as I've recently re-watched a full episode for the first time in quite a while courtesy of the wonders of DVD I thought I should make the effort! I think pretty much everyone of my generation who was allowed to watch ITV remembers these guys. It's a tribute to the show's popularity that the tag line above has almost made it into common usage on the streets of Britain...

You'll probably know all the characters; Hannibal, Faceman, BA Baracus, Howling Mad Murdock. The latter, Dwight Schultz, has gone on to play characters in the Star Trek spin offs but does seem to remain rather typecast! As was not uncommon with US shows in the 80s, this was a bunch of Vietnam veterans putting their military skills to good use. Lighter than shows like Airwolf, though - despite a large number of bullets being fired off, despite cars doing cartwheels, no-one ever actually died! According to the DVD this was a conscious effort to try and improve the standing of Vietnam veterans in the US, and the show was at least as popular in the US as it was over here. 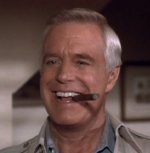 So, what are my main memories of the show? Well, the whole BA "I ain't getting on no plane, fool!" thing with the drugged milk always stands out. The team's ability to forge large armoured vehicles out of the scrap lying around in the warehouse they'd been locked in was always impressive too! An example of BA's creations is below. There was also BA's superb van, of course, which I remember recreating in school at the time the show was on, and Face's corvette! Having watched the DVD again, Dwight Schultz's comedy performance as Murdock really does steal the show quite frequently and adds some refreshment to the show which might otherwise be very reliant on action and rather stiff acting from everyone else. And then there's the Starbuck gag for Face...! 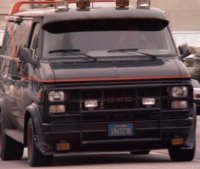 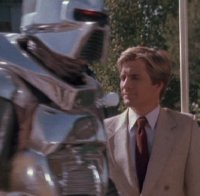 The A-Team is definitely one of those shows that defined the weekend for me back in the 80s. I even had the odd toy of the series - Face's corvette, but this was one of those ones that had concealed weapons all over it which of course it didn't have in the series. I'm surprised the series doesn't get repeated more on terrestrial ITV - I'm sure it would be immensely popular even today, and it's a terrific capture of 80s culture - remember the episode with Boy George?! The series is, as I've mentioned, available on DVD - see the advert in the right hand column for details.