Of the action shows I've looked at here, this one is the most short lived (at just 13 episodes) and very hard to find. Nevertheless, I remember watching it and reading a Look In strip based on it. It's not uncommon for US shows to get canned halfway through a season (in fact, Star Fleet only got halfway through its run in Japan!) despite showing a lot of promise, and Street Hawk was no exception to that rule. For those unfamiliar, Street Hawk is sort of like Knight Rider on two wheels. Only the bike doesn't talk, but the series is named after it.

Jessie Mach is a cop who gets injured in the line of duty. He is approached to work on a secret government project involving Street Hawk - an All-Terrain Attack Motorcycle designed for urban pacification. The government fixes up his knee but he retains his desk job - so it's quite a traditional secret identity sort of scenario in which the police he's helping might easily identify him.

Norman Tuttle is the brains behind the Street Hawk project and frequently gets upset by Jessie's reckless behaviour with his ppppprecious. Norman manages Street Hawk's onboard systems and triggers the Hyperthrust when needed. For a man who seems to like a cup of cocoa in the evening Norman has installed some serious firepower on the bike - perhaps he's compensating for something...?!

This the Captain of Jessie's precinct, Leo Altobelli and his assistant Rachel Adams - possibly Jessie's desk job partner? I don't really remember that much about these two, apart from the fact that Altobelli was your fairly stereotypical gruff commander with a soft side.

So, the bike! Apparently some versions of it still exist today. It had rockets, machine guns, a particle beam cannon... Yes, I said a particle beam cannon! Plus a KITT-like turbo boost feature for doing jumps. In the pilot epiosde it combines the turbo boost feature with an air brakes feature to perform a backwards flip. Also, Norman could initiate a Hyperthrust having checked Street Hawk's path was clear. This took the bike up to around 300 miles an hour - I remember thinking this was particularly cool at night, when the reflected street lights would streak across Jessie's visor. The Hyperthrust is reminiscent of the old Batman series' Batmobile flame exhaust effect, as is Street Hawk's launch style - out of a tunnel through a sliding advertisement in a wall and out onto a back street! 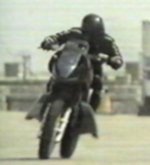 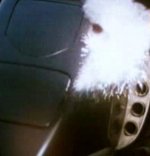 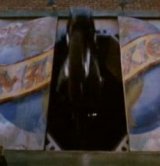 Due to its relative obscurity, Street Hawk has yet to see a DVD release but apparently there are rumours of one in the pipeline. Only one video, the pilot episode, was released at the time and is very difficult to find. But as always, eBay might come up trumps, you never know. The larger sites contain video clips which will give you a taster, anyway, until such time as it see the light of day on DVD - alternatively, get yourself Bravo - they repeated the series relatively recently.