The girls might have watched it for Hasselhoff, but the boys wanted a KITT (Knight Industries Two Thousand) all their own. In fact, I was lucky enough to have one - a remote controlled one anyway! Plus I used to ask my parents if we could get a red zum-zum light for the family car. Come on, admit it, you thought about it too! Anyway, about the show... 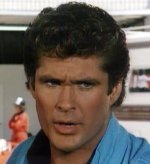 Yes, it's him, Mr David "Michael Knight, Lone Crusader" Hasselhoff. Having been shot in the head, the Foundation for Law and Government (FLAG) takes him on giving him a new identity through plastic surgery. The perks of the job include a funky wristwatch and a faithful sidekick. Which just happens to be in the shape and form of a bullet proof talking car!

This is Devon Miles, the very straight laced chap in charge of FLAG who gives Michael his marching orders. Devon generally takes a back seat role, but does occasionally get kidnapped and such like requiring a Knight to come to his rescue. Ahem.

Ah, Bonnie. Not as in beautiful - that's her name. Bonnie Barstow. She's the brains of the operation, providing KITT with new gadgets which just happen to prove vital later in the episode. She generally hung out on the FLAG mobile command truck, but like Devon, gets kidnapped on occasion so that Michael can go and rescue her.

Here he is. KITT. Animated voice synthesiser, cool outer shell with familiar Cylon-esque "zum-zum" red eye and for his final incarnation in season 4 he gets "Super Pursuit Mode". It isn't my fault the picture's blurry - he's supposed to be going really, really fast, OK?! 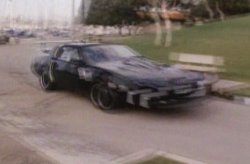 This is KITT boarding the FLAG mobile command truck. I don't know if that's what they actually called it, but that's what it is. The shock on Devon and Bonnie's faces is probably due to the fact that they're trying to figure out how come Michael can open KITT's door inside the truck when from the outside it looks like KITT can barely get in the truck without scratching his molecularly bonded shell. Bonnie's obviously watched a few Doctor Who episodes in her time...! 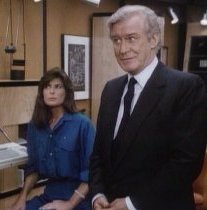 Knight Rider's a funny old show. I find it quite hard to watch now without cringing, although I still find that KITT's the best actor. Ahem. But then I think Baywatch, and now ads for a certain ISP, are probably colouring my perceptions somewhat - it was a great action show, with great stunts and what kid wouldn't want to watch a show with a talking car that has more gadgets than James Bond's Aston Martin?! Turbo Boost being an obvious favourite... The show is out on DVD as you'll probably have seen from the ad on the right - go on, judge for yourself whether Hasselhoff got outclassed by a bunch of LEDs!